With only a few days remaining until Election Day in the United States, things are likely to get really loud, as if they weren't already loud enough. If you're like me, occasionally you need to turn down the volume and embrace the silence. I'm hesitant to talk or write about silence since these very words interrupt it. And I'm hesitant to read about it for the same reason. That said, I do find inspiration from others who share an appreciation for it. For example:

In One Square Inch of Silence, Gordon Hempton says "When we listen to silence, we hear not absence, but presence." I believe this wholeheartedly. When we pause all the noise that we humans are constantly making, we discover a rich spectrum of natural sounds. They were there all along, but we couldn't hear them. And when we finally hear them, it's wonderful to stop and listen.

Hempton has traveled the world seeking silent places, and has identified a particular special silent spot in the Hoh Rainforest in Olympic National Park that he's declared his "one square inch of silence." If we can preserve the silence of that tiny spot, the effect will expand outward far beyond its center. And in this era of constant human noise, there's a compelling need to preserve the few remaining silent places. On Earth Day 2005, Hempton placed a small red stone on a mossy log to mark his spot. In late September 2020, having grown increasingly weary of society's crescendo, I shouldered my backpack and hiked solo into the Hoh Rainforest on a pilgrimage to find that one square inch.

It isn't hard to find. Hempton's website includes Directions to One Square Inch (in PDF), although the published coordinates seem to be a little off. I found it at N 47.86576°, W 123.87009° (link opens in Google Maps). There is not just one red stone, but several, evidence of others who have been on this same pilgrimage. The spot is surrounded by trees — Sitka Spruce, Western Red Cedar, Douglas Fir, Western Hemlock — in various stages of life and death. The landscape is blanketed in thick moss and ferns. I sit for a while, and listen. It is very still, but not silent. The Hoh River hums softly in the distance. Flies buzz by, and tiny birds flit in the surrounding trees. A distant crow calls. An elk bugles. 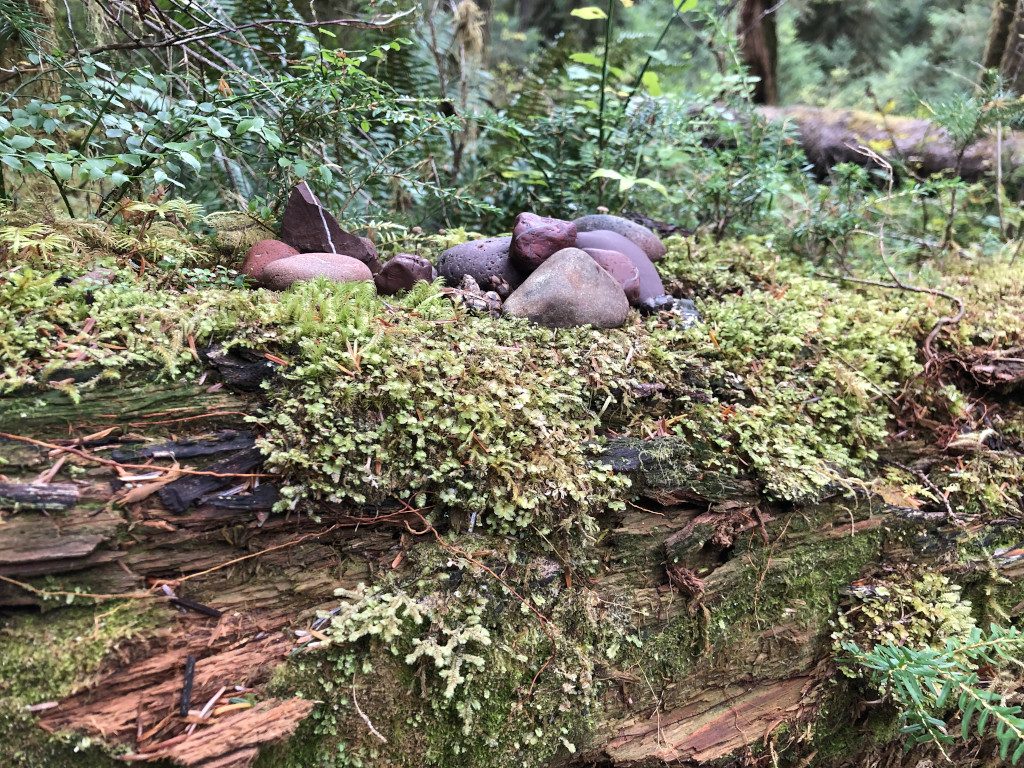 I take a decibel reading with my iPhone: 29 decibels average over five minutes, among my quietest readings in over three years of collecting data, though not the quietest (see below for my table of decibel readings for comparison).

I turn my attention to the Hoh River. Over the next few days I travel most of its length, from its origins at the Hoh Glacier on Mount Olympus to its terminus at the Pacific Ocean. I camp along the river bank, where historically the Hoh Tribe lived, fished, and foraged. For several days, I'm immersed in silence, which grows increasingly powerful. I take some additional decibel readings along the way, and capture a few moments from my journey on video.

I've taken some time over the last couple of weeks to fine-tune the video. All footage was captured on my iPhone, and the audio required some EQ finesse in order to filter out wind noise. I mixed the video in iMovie, and exported the audio track to Logic Pro where I adjusted volumes and EQ, then imported it back into iMovie. I also created an audio described version for people who are unable to see the video, taking care in the described version to find the right balance between being informative and respecting the silence. You can toggle between the described and non-described versions via the Description button on the media player. The media player is Able Player (it's free, open source, and the most accessible media player on the planet).

I recommend watching the video with a good pair of headphones, and the audio cranked. Silence is best appreciated when it's loud.

For the curious, I've provided below a sample of decibel readings I've taken over the last few years. Some of these are quiet places, others not so much, but it's interesting to compare them.