The 2020-21 NFL season kicked off this week. I write this having just watched the Seattle Seahawks beat the Atlanta Falcons in an empty stadium. The TV broadcast included fake crowd noises that were somewhat effective for manufacturing a sense of excitement, but a little off in their cadence and authenticity.

The kickoff event of the season was earlier this week on Thursday night, when the Kansas City Chiefs played the Houston Texans in Arrowhead Stadium in KC. No fake audience track was needed for that game. Kansas City is one of only six teams in the NFL that is allowing a limited number of fans to attend their games, at least at the start of the season (the others are Cleveland, Dallas, Indianapolis, Jacksonville, and Miami).

At Kansas City, there were reportedly 17,000 people at the game, which is 22% of their 76,000-fan capacity. Despite the relatively small crowd size, they sounded incredibly loud on the TV broadcast, seemingly as loud as a fully packed stadium, and loud enough to disrupt the Texans’ offense on a few occasions. This led me to wonder: How many fans are necessary for attaining nearly maximum volume, after which adding no amount of additional fans has a significant effect?

According to Guinness World Records, the loudest shout (individual) was measured at 121.7 dB, whereas the loudest crowd roar at a sports stadium was 142.2 dB, a record set at (whaddya know?) a Kansas City Chiefs game in Arrowhead six years ago, in September 2014.

According to George Neville, a guy on Quora.com who seems credible,
“Assuming that everyone is shouting away at the same level, if you double the number of people you should see an increase of about 3 dB each time you double them.” So, if we assume that an average group of say, 10 rapid football fans, is shouting at 100 dB, then applying George’s formula would give us these results:

In the final row in the above table, we’ve just exceeded the seating capacity of Arrowhead Stadium, and we’re close to their world record-setting volume of 142.2 dB. We also see, as expected, that doubling the crowd size has relatively little impact as the crowd size increases. A typical loud crowd, loud enough to disrupt opposing offenses, might be measured at say, 120 dB (comparable to a jet plane taking off or a loud rock concert). According to the above calculations, we could reach loud crowd volume with roughly 1000 people.

Of course, crowd volume is not that simple. Individuals are positioned at various locations surrounding the field, and at various distances from the receiver (i.e., your ears, or the TV crew’s microphone), and everyone is shouting at different levels and pitches. A great resource for learning about the physics of sound is the Sound Waves and Music tutorial on the Physics Classroom website. My knowledge of such things is admittedly basic, but I think I understand that sound waves produced by human voices in such a complex setting would encounter both constructive interference (when multiple voices complement one another and result in higher amplitude, as in George’s formula) and destructive interference (when sound waves collide and distort or cancel each other). The design of the stadium might be a factor as well, as sound is reflected off overhanging structures and bounces back down into the stadium to remix with the other sounds.

This boiling soup of sound may explain why a roaring crowd sounds nothing like an individual human voice. It sounds more like traffic on the freeway, or the ocean.

But what does all this have to do with Silence?

A Moment of Silence

Another thing happened at the Chiefs-Texans game. Prior to kickoff, both teams gathered together arm-in-arm in the center of the field, and the public address announcer called for “a moment of silence dedicated to the ongoing fight for equality in our country”.

Silence is powerful. While I can’t verify this with decibel readings, I know the volume of several people being silent together is much louder than one person being silent alone. I’ve experienced this personally in meditation retreats. And of course, by “louder”, I mean “quieter”. Imagine the power of 17,000 people observing silence together! Not to mention the thousands of fans who like me, were participating in the moment of silence from their living rooms. 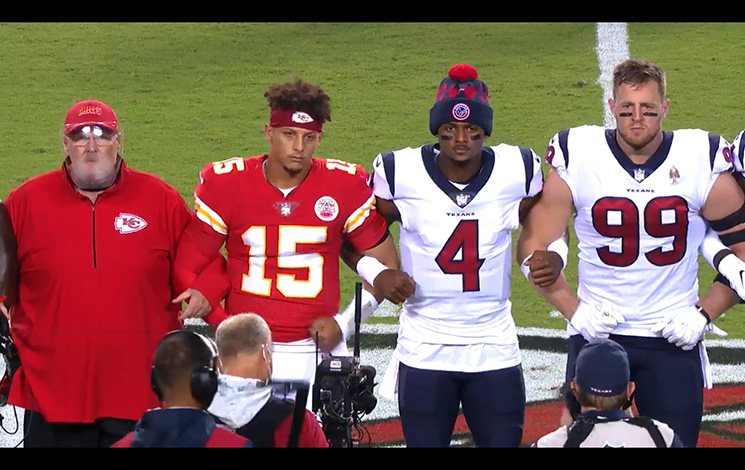 As the din of the crowd faded and silence settled in, I found hope — for the first time in months — in the possibility of this moment. But I also had doubts. Can they pull this off? There’s always gonna be that one asshole who feels a need to draw attention to themselves at such moments and ruin it for everyone else. There were two or three seconds where it seemed like they might actually succeed. The sound in Arrowhead Stadium, as witnessed in my living room, was quiet, nearly silent. Then there were a couple of assholes. I think I heard someone shout “Yeah!” and someone else shouted “Chiefs!” But then, there were boos. More than just one or two boos; an entire crowd of boos.

Why were people booing? Are they opposed to equality? Opposed to the idea expressed in the U.S. Constitution that “all men are created equal”? Opposed to two opposing sides coming together arm-in-arm to demonstrate that unity is possible despite our differences? It’s also possible they weren’t booing the moment of silence at all; perhaps something else was happening live in the stadium that triggered the response, and the TV audience is missing that context. Perhaps one asshole whipped out their confederate flag and people were booing that.

Another question, pertinent to this post, is: How many people were booing? It’s difficult to say, as that goes back to my early question about the physics of crowd noise. It sounded like a crowd of people booing, but how many people does it actually take to attain that sound? Maybe the number is quite small. If they were booing unity and equality, I sincerely hope what sounded like a booing crowd was actually just a small number of booing assholes.

Social media erupted with condemnation of the booing, which renews my hope that most people are good people. Kindness and compassion still exist in America. But even the largely pro-unity social media posts I read included a few anti-unity comments, possibly from Russians, but nevertheless, destructive interference. Harmony becomes dissonance. Eventually it becomes unlistenable and I need to turn down the volume and embrace the silence. More on that in Part 2…