Each New Years Eve since 1982, I have found myself humming that defiant yet celebratory New Years anthem by Prince, "1999". This reminds me of something I have often puzzled about, but until now have never blogged about or even mentioned to anyone.

This symbol was said by Prince to be unpronounceable. Therefore, the dilemma: What should we use for alternate text when an image is meaningful, but unpronounceable?

In the above image, I chose to use alt="an unpronounceable symbol". However, I’m not sure if that’s the right approach. If sighted users aren’t supposed to pronounce the symbol, should screen readers pronounce it? Perhaps a null attribute (alt="") would be more respectful of Prince’s intentions, since screen readers don’t verbalize images that have null alt attributes.

The authors of the current Prince Wikipedia page chose to forsake the symbol’s unpronounceability and used an alt attribute that describes the symbol in considerable detail:

Logo. Hollow circle above downward arrow crossed with a curlicued horn-shaped symbol and then a short bar

That’s certainly more informative than silence, but is it meaningful? In my opinion, it’s only slightly better than the official ASCII version of the symbol: O(+>

Sighted people may notice that the unpronounceable Prince symbol contains the universal signs for both male and female, united together into one. Some may agree that this union seems to either be celebrating sexuality or androgyny, or perhaps toponlinelexapro.com both, which is arguably important information since it’s part of Prince’s persona and brand. So, we’re faced with the challenge of succinctly communicating that symbolism to users who are unable to see the logo, and I don’t think the Wikipedia description quite reaches that target. According to the Prince.org Online Fan Community, "the glyph incorporates the male and female signs along with the alchemy symbol for soapstone". Maybe that description should be incorporated into the alternate text for the image.

Interestingly, the official copyright registration of the symbol shows that the symbol actually does have a title, "Love Symbol No. 2". One can imagine that the artist at that time formerly known as Prince probably struggled with this same dilemma that we now face when he was filling out the copyright application for his unpronounceable symbol, and was faced with "Title", which is a required field. 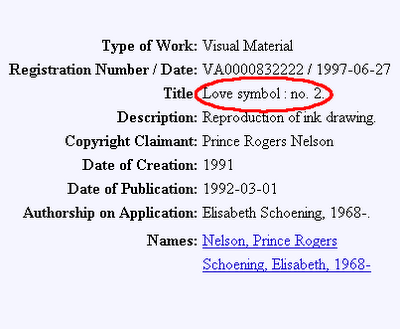 With Prince having set this precedent, I think we’re justified in referring to the symbol using some sort of verbiage, and I think we probably should refer to it by it’s Prince-given title. Therefore, after this careful analysis I’m now inclined to use alternate text that combines information from Prince himself and from his fan club:

Love Symbol No. 2: a symbol that incorporates the universal male and female signs along with the alchemy symbol for soapstone

Anyone have better suggestions? Just something to ponder this New Years Eve as we party like it’s 2009.