NOTE: Check this blog periodically for updates to the Accessible NCAA Bracket script. Be sure you have the latest version:

Every year since 2006, I’ve created an Accessible Tournament Bracket for the NCAA Men’s Basketball Tournament. In 2010 I expanded that to include an accessible tournament pool which a dozen people or so, most of whom were screen reader users, participated in.

This year I’m trying something different. Rather than create my own bracket and site, I thought I’d try to improve the accessibility of an existing site. The tool that makes this possible is Greasemonkey. 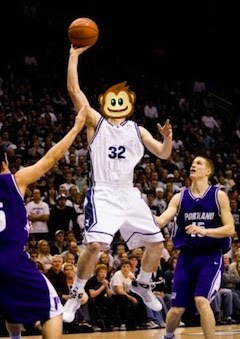 Greasemonkey is a Firefox extension that allows authors to write scripts that interact with and modify the content of web pages, and allows users to run these scripts. There are tens of thousands of scripts available on userscripts.org (be careful what you download though. Read the reviews first, and only download from a known, trusted source).

The potential for accessibility here is huge. Got an inaccessible site? Site authors aren’t responding to your requests to fix its accessibility problems? Greasemonkey provides a possible solution. With a little knowledge of JavaScript, you can add a scripted layer to the existing web page, manipulating the content of that page and making it more accessible. Not only does this provide a temporary accessibility solution, but it provides a live demo of your proposed solution, which might help in persuading the site authors to improve their site.

I looked at several major NCAA tournament sites and ncaa.com seemed to be the one with the most potential. It uses HTML5 and all of the bracket content is organized using divs, so it would be relatively easy to replace the div-based structure with one that’s more semantically meaningful, The following two sections explain what I did and how to use it.

How to Use It

Although Greasemonkey can be very effective tool for fixing accessibility problems, one significant shortcoming is that the scripted solutions may no longer work if the page is modified. At this moment, my NCAA.com script seems to be working. However, as the tournament progresses, the site may introduce new features that I hadn’t accounted for. If you spot any major problems, let me know. Or better yet, if you have JavaScript skills, please feel free to modify this script to make it better!

Finally, I apologize that there’s no accessible tournament pool this year. I had hoped to tackle the NCAA Bracket Challenge using this same approach, but it proved to be too great a challenge.