Donald Trump wants to “Make America Great Again”. I doubt that anyone can dispute that this is a noble goal. But what does “great” mean when referring to a country or nation state?

I’m afraid Donald Trump’s definition of “great” doesn’t mesh with mine and I wouldn’t want to be associated with his vision, so unfortunately I won’t be wearing one of those cool red hats. 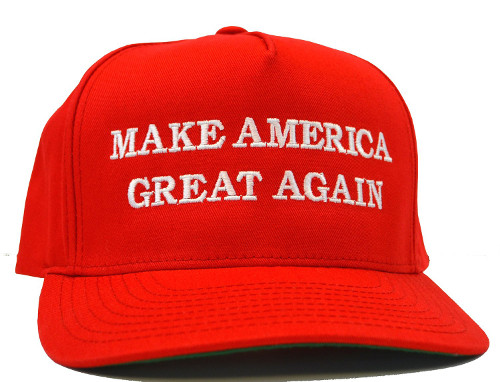 For Trump, a “great” America is a country that’s white, wealthy, and male-dominated (although served by stereotypically beautiful females), aggressively asserting its dominance over the rest of the world. In Trump’s America, “great” is measured exclusively by wealth and power.

A Great America is diverse, a “melting pot”, that effectively utilizes the diverse ideas that come from a rich variety of perspectives and experiences. The growth and success that comes from this diversity is shared among all participants, not just a few white men at the top.

A Great America is compassionate. It’s a country that has attained enlightenment but uses that to help others attain enlightenment as well. A Great America understands that it is greatest if the entire world is great. Anytime you have one great country and lots of other not-so-great countries, you have a recipe for resentment, conflict, and terrorism.

Start by not electing Trump. His vision is anything but great; it’s not even good. And don’t elect people who at any point have said they support him, because his vision has always been the same (consistently bad), and if they shared that vision or couldn’t recognize it for what it is, they can’t be trusted to serve in a public position that has any real responsibility.

For my part, I can continue working to make the world more accessible for all members of society. That’s been my predominant role for over twenty years, and the community of people who are working with me in this role is growing and expanding which I’m really excited about. America is a great leader in this area, but we’re actively working with people around the world, all committed to breaking down technological and societal barriers that prevent certain individuals from fully participating.

But lately I’ve been wondering whether this is enough. What good is an accessible website if a person has no food or water, or if children are born into a world that is ravaged by war? I wonder how I can contribute toward ending these problems. A Great America is a country that applies its wealth, innovation, and compassion to solving these age-old problems.

I recently asked a question along these lines on Facebook:

Feeling a need to MAKE AMERICA GREAT AGAIN. I think a good place to start is to help ensure that children in the U.S., plus our neighbors around the world, aren’t starving while we enjoy our lavish American feasts (bacon, eggs, & toast with jam this morning for me, plus OJ and several mugs of premium coffee, and I’m already thinking about lunch). Unfortunately somewhere between 10 and 13% of the people in the world are hungry. I know there are lots of organizations that are working to address this problem, but which ones are most effective? Any insights?

I received a lot of excellent recommendations from friends, including organizations that are working internationally to implement sustainable solutions for ending hunger and thirst and attaining peace; as well as groups that are doing similar work on a micro level, within our communities.

I consulted Charity Watch, which conducts in-depth analyses of charities’ financial reporting and assigns grades (A+ to F) that reflect their overall efficiency, taking into account such factors as the percentage of total expenses the charity spends on its programs, and the amount of money it costs the charity to raise $100. This is an excellent resource for narrowing the field and identifying top-rated charities in various categories.

There are currently over 600 charities featured on the site, and this doesn’t include private foundations that are doing great work such as the Bill & Melinda Gates Foundation.

These organizations – especially those that are truly effective at doing great work – need our support. Maybe we can contribute financially, or maybe they offer other opportunities for getting involved.

The 2016 U.S. presidential election has been divisive and exhausting. I have friends unfriending friends over their differences in opinion. The President of the United States is undeniably an important job, as is the job of supreme court justice, one or more of which the new president will likely appoint. I understand that our national laws and policies have an influence on whether people have to live in poverty, hunger, and thirst, or experience the horrors of war. But these jobs are not the only jobs. There are lots of other jobs too, and regardless of who wins the election there will still be hundreds of organizations and millions of individuals working to solve problems in the world. I plan to join them. And I hope you’ll join them too. Let’s set politics aside and work together to create solutions and make America (and the world)…

Couldn’t agree more. Thanks for posting it!

Terrill, I think you hit the nail on the head. Great post!

Please stick to what you understand. Clearly, you also had Trump derangement syndrome at the time of this blog post. I assume you are still contagious, so try not to give it to anyone else in the meantime.

It’s your blog, sure. I came here looking into various opines w.r.t. website design and discussion. What in the hell did Trump DO (BEFORE THE ELECTION, for that matter) to the poor children who are starving?? Think please, before write and espouse propaganda (probably assuming you are being an ‘upstanding citizen of the world’) standing up for the ‘destructive’ person you have been told all about by the multitude of biased and bigoted ‘news’ sources which comprise the bubbled world that your super-ego connects to.

Have some tolerance, listen to people outside your bubble-world and maybe you’ll get it.

Thanks for your feedback, Concerned Anonymous Citizen. I still feel that innovation, diversity, and compassion are qualities that make America great; and that we can all help make America great by doing good in the world and supporting organizations that are doing good. I’m sorry if that offends you.

>Terrill on January 19, 2017 at 8:54 pm said:
>Thanks for your feedback, Concerned Anonymous Citizen. I still feel that innovation, diversity, and compassion are qualities that make America great; and that we can all help make America great by doing good in the world and supporting organizations that are doing good. I’m sorry if that offends you.

Hi, thank you for your response. It’s “Concerned Citizen of the USA” and not your addendum/modification (Anonymous) which seems to serve as a snarky way to address the handle.

I too and many people I know feel “that innovation, diversity, and compassion are qualities that make America great”. Look at all that has been done by the United States of America and by those inspired around the world by the USA to look into their own cultures and history and to do great things as well (one can even say that the ideas of America stem from millennia of human civilization).

I’m sure everyone in the USA would like to support organizations ‘doing good’. Not blindly, mind you. But, pragmatically. This should be done with an understanding as to what ‘doing good’ means, to avoid being naive. In any case, guess what? Many do this already and have been doing this since the founding of the country.

So, I’m sorry that you felt the snarky assumption that I would be ‘offended’ by ‘doing good’ (whatever your ‘good’ is, it might be ‘bad’ for someone else). It is sad that your provincial view of others is as such -others, whom you seem to not be understanding because of some passionate sophomoric attitude.

Hence, this was the reason I suggested learning more about what you are acting passionate about before you display more bias and bigotry of said subjects.