Well, I’ve done it. February may be the shortest month of the annual dozen, but this year it was jam-packed. Among copious other activities, I managed to record 16 new songs and produce an album. I did this along with thousands of other artists around the world who participate on either of two web sites devoted to creating an album in Feburary, fawm.org and RPM Challenge. This is my first year doing this, and I struggled with the decision of which community to join, so I decided to join both. This blog is written in part for others who face a similar quandary, and to clarify some distinctions between the two sites. Let me be clear that I’m not recommending one over the other – just stating the facts as I see them. Both sites make it clear that this isn’t a competition, so I want to respect that sentiment in this blog post. My plan here is not to reveal a clear “winner”, but is simply to provide information to folks who are wondering how the sites compare.

Initially I thought my participation in the two communities would result in two albums, but halfway through the month I had only recorded three songs and reality began to set in. So with only a few exceptions I posted much of the same material to both sites, and justified that by the fact that (a) there are other folks doing the same thing; and (b) a good scientific comparison demands that I control as many variables as possible.

Before I plunge into comparing the two sites, readers of this blog might be especially interested in this song, which was inspired by a blind university student who came to my office and said “There’s something wrong with this document”. As it turned out, this was quite an understatement. Of course it’s possible to create accessible PDF files. Thanks to Adobe for providing us with the means to make that happen. Unfortunately it requires some awareness on the part of document authors, which was the shortcoming in this case. When I opened the document on my own computer and asked Microsoft Mary to read it aloud, I was impressed with how confidently and dramatically she read utter nonsense. So impressed, in fact, that I went home that night and set it all to music. Check out Man With Small F on my Music site.

Now, back to the review… 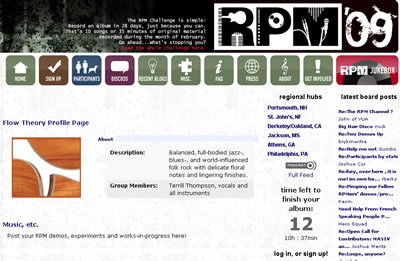 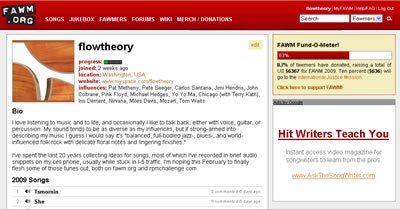 To others: I don’t recommend doing both. One thing I’ve really missed out on by doing this is the other half of communication: Listening. Sure, I can post songs to both sites, but it’s a major challenge keeping up with what others are doing in both communities, and community is what it’s really all about.

I prefer the FAWM interface, especially the ability to add comments to songs; but I prefer RPM’s emphasis on CD production. Ultimately it will probably come down to: Where are my friends? If you read this blog and you plan to do either of the challenges in 2010, let me know. Maybe we can do it together.

There’s also the possibility that what I’m describing here only applies to 2009. Both sites are developed and maintained by volunteers, and both sites go into virtual if not actual hibernation during the off season, so maybe nest year they’ll both be fully accessible. I posted some accessibility recommendations on the RPM Discussion Board, and according to a moderator we may see “see some big changes in the site over the next eight months, and by 2010… an excellently navigable and intuitive website that really works.” Stay tuned…

One reply on “FAWM, RPM Challenge, and Man With Small F”

I've just recently joined FAWM (2011), and posted my first FAWM song. I've not tried RPM, but, frankly the thought of producing an album in a month (A process that usually takes me two to three years) is a bit overwhelming. Thanks for the review of both!