I work in a variety of places. I share an office with Doug at the Seattle campus of the University of Washington. I share an office with David, Carly, Stephanie, and Nigel at Western Washington University in Bellingham, with Max a short shout away. I share an office with anyone else who happens to be working at Woods Coffee on any particular day. But sometimes I just want to be alone, working in a quiet place where I can focus on the tasks at hand without distraction. Hands down, the best place to do the latter is my home office. All this week, I've had no choice but to work every day in my home office as outside my front door, I've been knee-deep in snow. 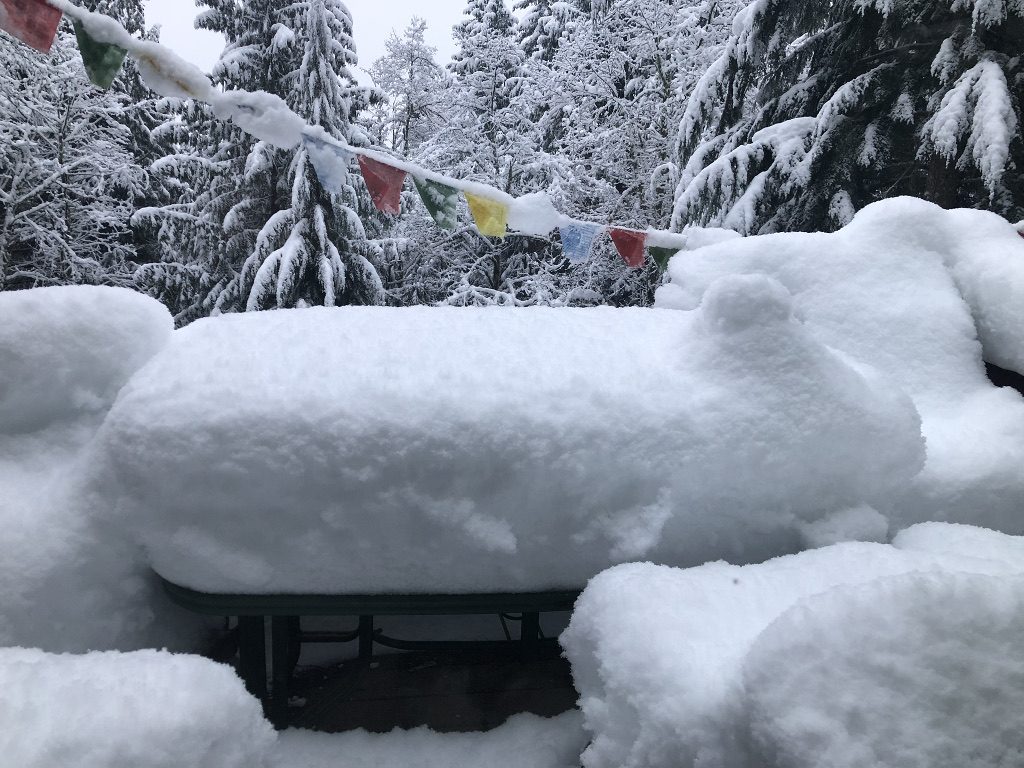 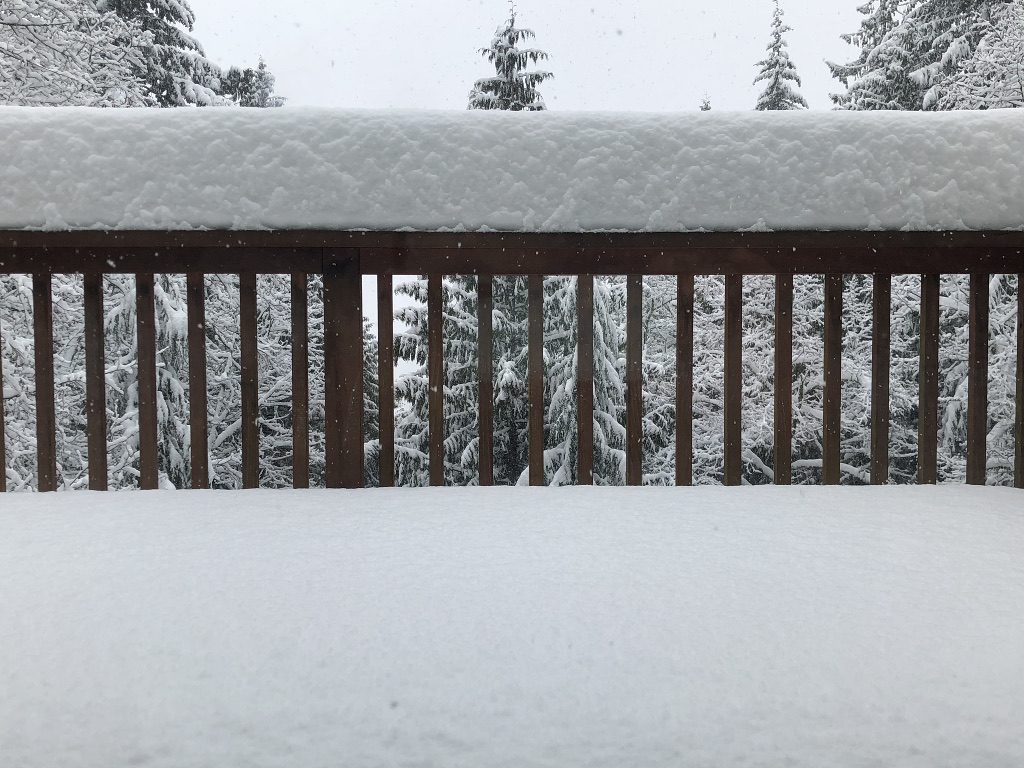 After a week of being snowed in, I'm still loving it, partly because I'm a huge fan of snow; but also because I recently upgraded my home office so it's extremely comfortable and helps me to achieve maximum work efficiency. Some of my equipment travels with me from office to office, but a few things remain at home. So when I arrive back home in my safe, warm den I can plug in my computers and continue to be productive.

Because I'm here, and because I love it, I thought I would share a bit about my setup. First, I'll describe some of the problems I was experiencing before upgrading.

The Keyboard and Trackpad Problem

My primary production device is my MacBook Pro. I bought my first one in 2011, then replaced it with a newer model in 2017. From my perspective, the newer model has two major design flaws:

First, the top row of keys is missing. Since keyboards were invented, this had been where one could expect to find the Escape key and function keys. Now, in its place there's a "touch bar", which offers different controls depending on what you're working on. Maybe there's an escape key, and maybe there are function keys, but maybe not. Even if they're present, you can't blindly tap them because there's no physical button to tap; therefore you have to look, which is much less efficient (and less accessible) than touch-typing with an omnipresent set of keys. This is supposed to be progress, but I'm a curmudgeon and I don't like it.

Second, the trackpad on the newer models is huge compared to its predecessor. Compare the photos below. 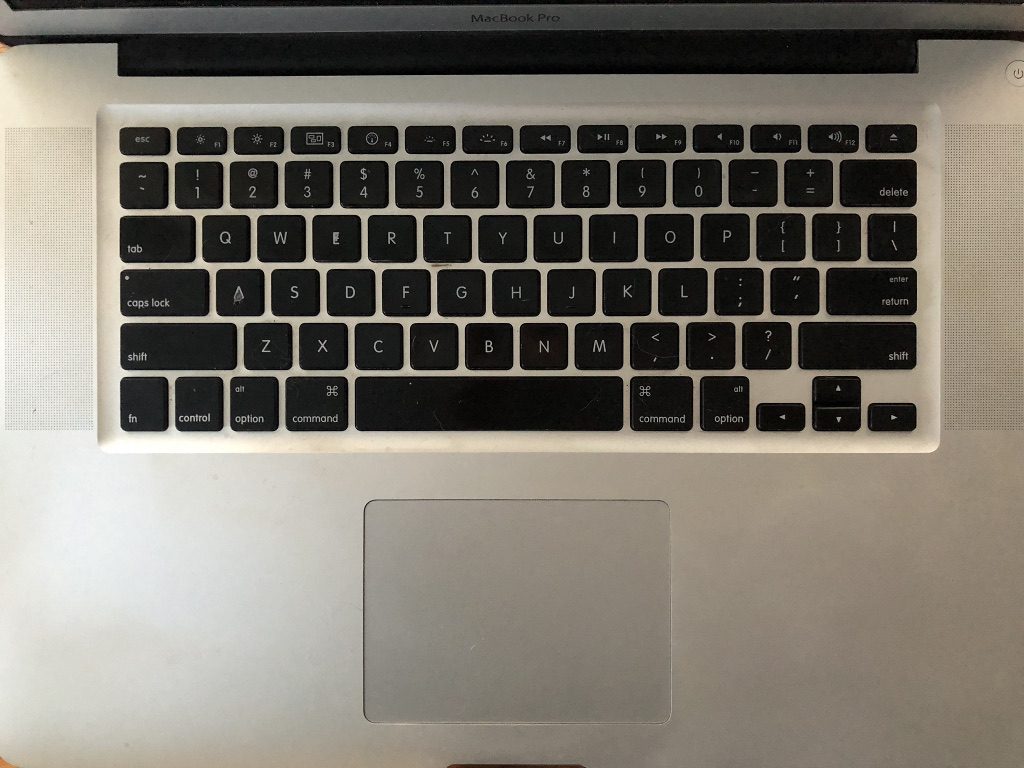 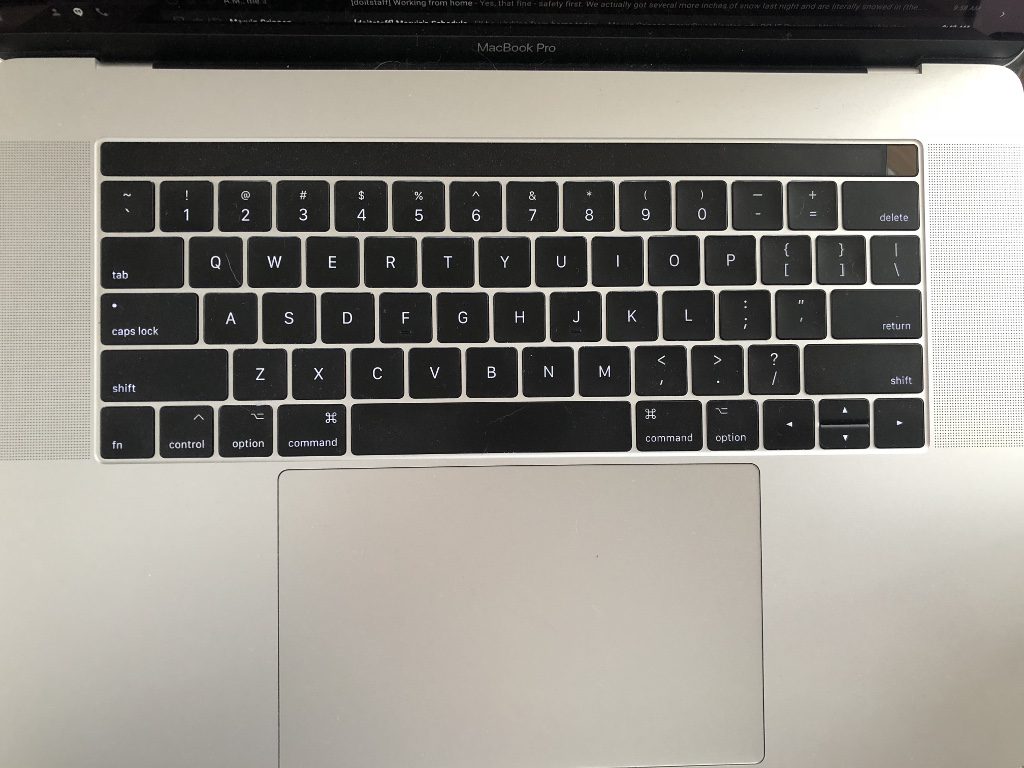 In the 2011 model, the trackpad was 4 inches wide by 3 inches deep. The newer model is 6.25 inches wide by 4 inches deep. After upgrading, I found myself frequently glancing my palm against the trackpad as I typed, and consequently losing my focus within applications. I'd be typing away in an email or document, and suddenly I would no longer be there. I would still be typing though, and the last several characters had been inserted somewhere else where they didn't belong. So I would have to figure out where that was, and correct whatever mess I had made. This happened multiple times every day.

Another frustration was the lack of symmetry. Notice that the trackpad is centered horizontally within the device, but the keyboard itself is not symmetrical. The home keys "f" and "j" are offset to the left, as is the space bar. This was true in the older model too, but it's much more noticeable with the larger trackpad. With fingers positioned over the home keys, if I reach due south to do something with the trackpad, I expect my finger(s) to be positioned in the trackpad's center, but I'm actually positioned to the left. This seems subtle but it frequently matters, and my taps and swipes are often in the wrong places, which results in more messes.

Although I primarily work in Mac OS, I also spend a lot of time in Windows, testing websites in Windows browsers and testing accessibility using Windows screen readers and other assistive technologies. I frequently switch back and forth between my MacBook Pro and my Dell XPS laptop. Note in the photo below how my Dell keyboard differs from my MacBook Pro. 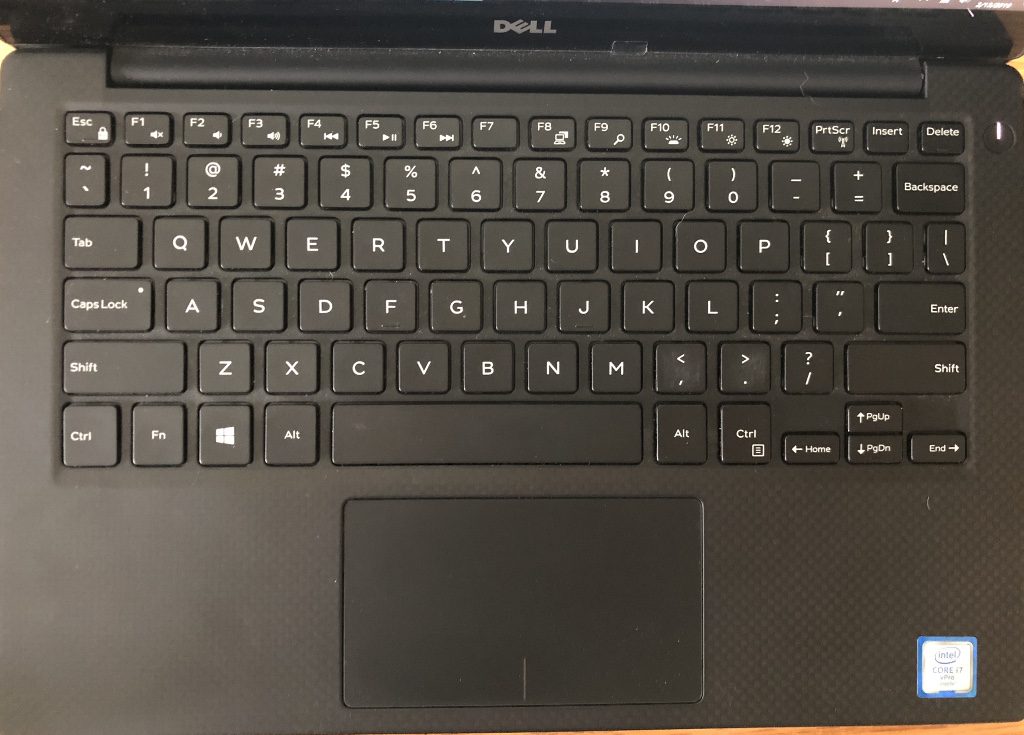 First, the Dell keyboard is much more perfectly centered with the trackpad. It's not perfect, but it's much closer. The biggest difference though - which has had a major negative effect on my productivity - is the arrangement of the modifier keys in the lower left corner.

In particular, the swapped positioning of the Fn and Control keys has been a frequent problem. I switch from Mac to Windows and mess up a few times before getting my muscle memory to adjust to the Windows key configuration. Then I switch back to Mac and again experience a frustrating period of clumsy transition.

The Solution: One Keyboard/Mouse for All Devices

The keyboard can pair with any Bluetooth-enabled device that supports typing, and enables me to assign each of my first three function keys to the devices of my choosing. In my setup, F1 switches to my Mac, F2 to my Dell, and F3 to my iPad. The latency is barely noticeable, so I can generally tap the function key to switch to a particular device and immediately begin typing on that device.

I now have one keyboard for all devices, so I don't have to stumble with different key configurations when I switch between Mac and Windows. Also, the keyboard has an Escape key and a full row of function keys!

The mouse has similar functionality. I can tap a button on the side of the mouse to switch between paired device 1, 2, or 3, then immediately begin clicking and dragging to my heart's content on that device. 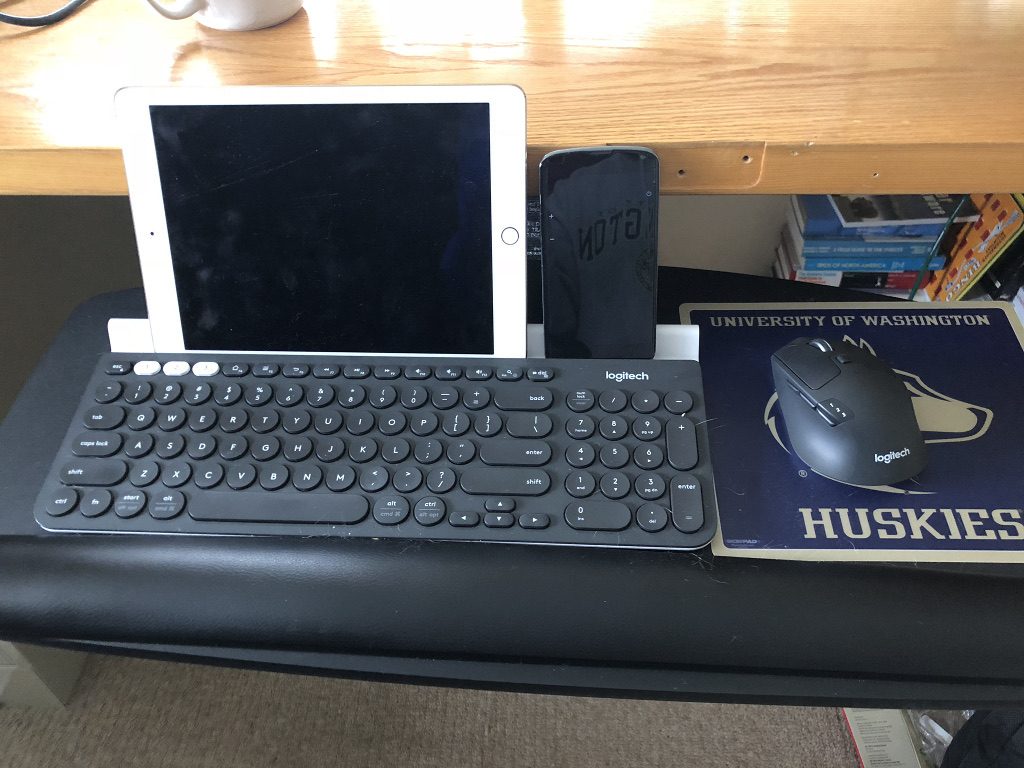 While I was upgrading my gear, I figured I would upgrade my display system as well. In doing so, I explored several questions:

1. Do I want multiple monitors or one large one?

I've never been a huge fan of multiple monitors. When I've tried it in the past, I found that I was frequently losing my mouse in the transition between monitors, which was frustrating and inefficient. That said, I do appreciate the benefits of having more screen real estate. If I'm working on a web development project, I like to have my web browser on the right and my code editor on the left. If I'm working on a document, I like to have that on the right, with reference material (other documents, emails, the Web) on the left.

The bottom line though: I want both of these applications, plus other supporting apps, to be positioned in front of me so I don't have to turn my head left and right to access them, and so I can easily move my mouse between them without getting lost.

2. How large is large enough?

The question of size is partly influenced by my available workspace, but also by need. As I said above, I like all my applications to be positioned in front of me. If a monitor is too large, applications start to fade into my periphery and require head movement. Also, if a monitor is too big I'm viewing content along the edges from an angle, which distorts shapes and colors. This is a problem that curved monitors are designed to fix, but do I want a curved monitor?

3. Do I want a curved monitor?

With a curved monitor, I can have a larger monitor and all content is facing me directly, even on the outside edges. That makes sense, and I like the idea of being wrapped in my work. That would surely be great for emersion and focusing. But I spent a lot of time over several weeks sitting and standing in front of monitors of varying sizes and shapes, and wasn't really impressed with the few curved models I checked out. They just felt like a novelty to me, plus they seemed to be more prone to glare than flat screens, with light sources hitting them from multiple angles.

I decided to purchase a Dell 27-inch ultra-thin HDR monitor (S2719DM, not curved), and I really like it. The size and resolution is perfect for my needs. It has two HDMI inputs so I can plug both my my MacBook Pro and Dell into the monitor, and toggle between the two with the tap of a switch.

Even though I chose a single large(ish) monitor rather than a multiple monitor configuration, I still have my laptop screens, which I can use as secondary monitors. I'm choosing to use those for apps related to communications, such as Twitter, Slack, or email. I'd like to be better able to keep up in real time with all the conversations that are happening in these spaces. I know many of you are able to do this quite well and I'm envious. However, I don't want to be too distracted by the barrage of incoming information. So far, I'm finding a satisfying balance with having these apps off to the side, available if I choose to check them but not begging for my attention.

I also invested in a height- and angle-adjustable keyboard and mouse tray that's mounted under my desk and slides under the desk when it's not in use. This, combined with a highly adjustable ergonomic chair, really makes for a comfortable workspace, conducive to hours and hours of productive computing.

To my left, I have an inspiring view across Lake Whatcom to Stewart Mountain; and straight in front of me I have an equally inspiring view of the evergreen forest, which right now is blanketed in snow. And behind me I have a closet packed with outdoor gear, so when my work is done (as it is now) I can grab what I need and head outdoors. 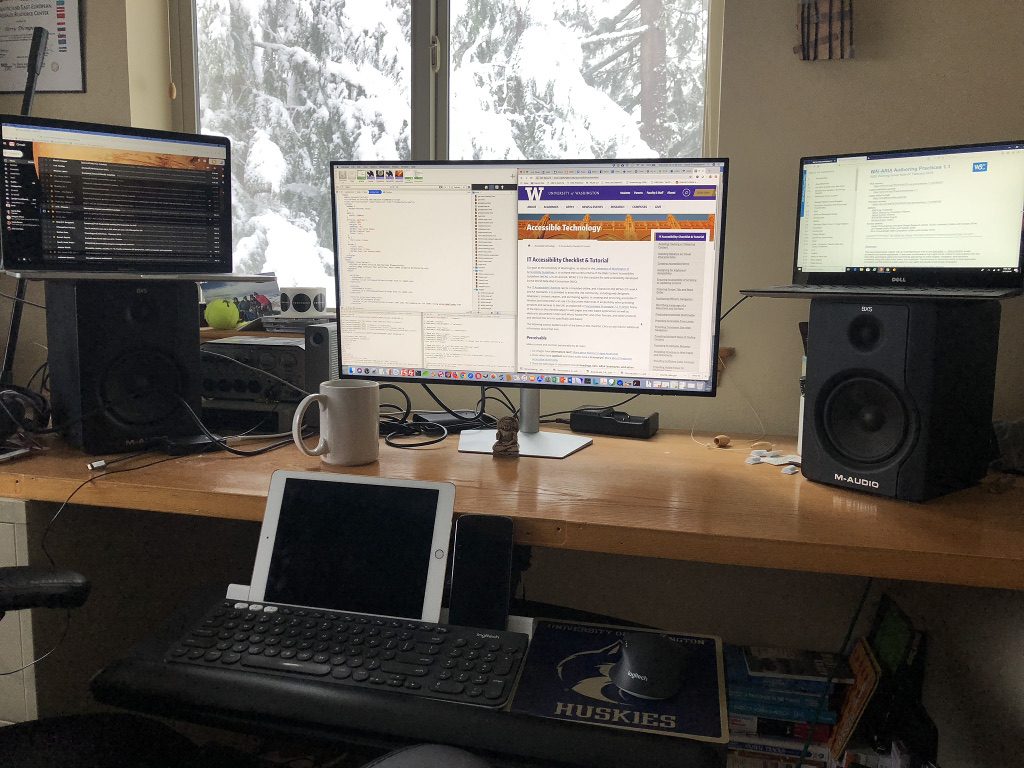 One thought on “Optimizing my Home Office”