I’m one of those people who finds the final week of a calendar year to be a good time to reflect on the waning year and make plans for the waxing one. Being just one person in a world of 7 billion, I’ll keep this post short and highlight just one accomplishment from 2012 and offer one resolution for 2013.

First, the accomplishment: In 2012 we at AccessComputing at the University of Washington produced the video IT Accessibility: What Campus Leaders Have to Say. We invited university presidents, chancellors, chief information officers, and other IT leaders from across the country to share their thoughts on the importance of information technology being accessible to all users, and to capture these thoughts on video. We received several enthusiastic responses to our invitation, which we assembled into one final 15-minute video. 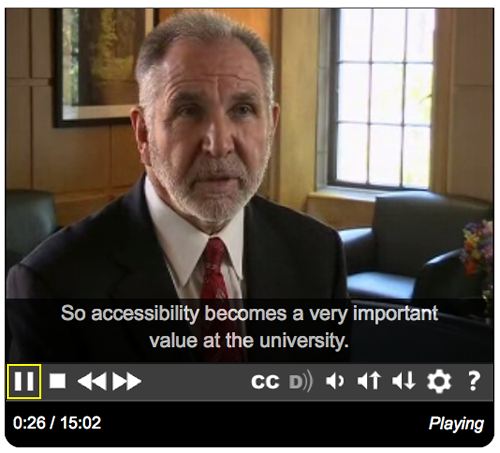 The video premiered on November 7 at the 2012 EDUCAUSE Conference and the following week was featured during a keynote luncheon at Accessing Higher Ground. It was covered in The Chronicle of Higher Education, and inspired EDUCAUSE president Diana Oblinger in The President’s Blog to urge senior higher education leaders to “use [the video] to begin a dialogue on how their institutions can more effectively achieve IT accessibility.”

Diana’s plea inspires my New Years Resolution. We at the University of Washington have already begun a dialog on IT accessibility, but in the coming year I plan to do my part in continuing that dialog and to engage even more extensively with the campus community to effect positive change.

I encourage others to do the same. If you need a New Year’s resolution, here’s one to consider: If you haven’t already done so, get the conversation started on your campus. Get IT accessibility on the agenda of a high-level meeting. Start an on-line discussion list or forum. Organize a half-day capacity building institute and invite key stakeholders. If you already have such a dialog on your campus, work in 2013 toward attaining measurable outcomes that truly make a difference. If our video can help you to engage your campus leaders, please feel free to use and distribute it as you see fit.

If you watched the video on the DO-IT Video site, you may have noticed that we recently upgraded our site with a new media player. That player is chock full of exciting accessibility features, which I plan to blog more about in 2013. So stay tuned. Meanwhile…May you all make great discoveries and experience moments of profound joy in the New Year! See you there.

Good job Terry! An inspiration for us all, and a real invitation to make a difference/make a change for all.