This week I'm at the AHEAD conference, and Sean Keegan, Jayme Johnson, Ken Petri and I have teamed up for four presentations on video accessibility, including an all-day pre-conference session. I also gave a national webinar on Tuesday, live from my hotel room, on this same topic.

Several people at the conference (directors and staff of higher education disability services offices) have asked specifically about captioning YouTube videos. The need they're describing is this: Faculty members are supplementing their courses with materials from YouTube, resulting in the need to caption those videos as an accommodation for deaf students. Only the owner of a YouTube video can upload captions, so even if the college or university were to caption the video themselves, they would need to send the caption file to the owner, hope the owner checks their YouTube inbox, and persuade the owner to upload the caption file. There are plenty of success stories with this approach, but there are also plenty of stories of YouTube owners never responding to these requests.

In response to the folks who described this need, I thought I'd revisit some of the free online captioning tools described in my earlier blog post Free Tools for Captioning YouTube Videos, and see if one or more of them might provide a solution. Perhaps they could help not only with the captioning process, but also as a means of delivering a captioned video to students who need this accommodation. The ideal tool would have these characteristics:

With these criteria in mind, I took a fresh look at dotSub.com, Subtitle Horse, CaptionTube, and another tool that I hadn't reported on previously but have since grown to like a lot, Universal Subtitles.

Below is a summary of how these tools compare on specific criteria, some of which are relevant to the need at hand, and some of which I'm documenting just because I have the opportunity, and I figure folks might be interested.

All four tools accept YouTube URLs as video source. Universal Subtitles is the only tool that supports the new short URL that YouTube offers when you select "Share" beneath a YouTube video. This URL has the format:

Other tools haven't updated their parser to support that, but they all support URLs in this format:

In my original blog post on this topic, I ended up favoring dotSUB over all the other tools, primarily for its keyboard model. All tools support basic transcription functions via keyboard shortcuts, which is important for getting into a steady flow and transcribing video efficiently. Proof that it's sometimes the simple things that matter, dotSUB is the only tool that displays the keyboard shortcuts on the screen at all times. That's one less thing in life to commit to memory, and I really appreciate it. SubTitle Horse also displays keyboard shortcuts, but you have to scroll to see them all.

One things I've grown to not like about dotSUB is the militant way it handles overlapping caption times. The following screen shot demonstrates this problem. 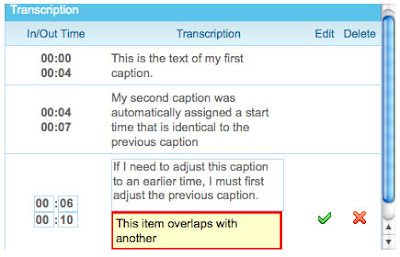 When editing captions, you sometimes need to change the start time to an earlier time. This often results in a collision with the previous caption, and dotSub throws up an error "This item overlaps with another" and prevents you from saving the changes until you've entered a valid time. I would prefer that dotSub honor my request to change the start time, and automatically adjust the previous caption's end time so there is no overlap. That's what Subtitle Horse does.

Universal Subtitles rocks. It has three modes for typing captions. The coolest of these is called "magical autopause". You just type, and it pauses when it thinks you need it, and resumes playing when it thinks you don't. This takes some getting used to, but once you do you can caption a video lickity split. You don't have to remember any keystrokes - just type! If you prefer controlling the pause and play functionality yourself, you can do that too, by pressing the tab key (or shift+tab to rewind eight seconds). Time syncing is a separate step, performed by watching the video and pressing down arrow whenever the next caption should appear. Then, to adjust timing you can drag the caption text along a timeline. This is all very intuitive, maybe even fun! 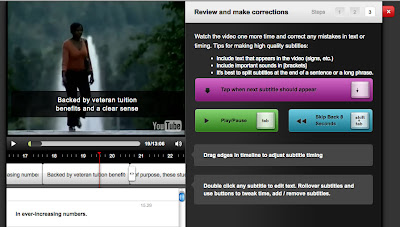 CaptionTube sucks. I remember thinking that the first time I blogged about it, but I couldn't remember why I felt that way. Now that I've given it a second look, I still have the same reaction. So, I stand behind what I said before. Actually, there is one potentially good thing about CaptionTube: It does a better job than all the others at utilizing the YouTube Data API. Users log in with their Google ID and have direct access to their own YouTube videos, and theoretically can even save their caption files directly to YouTube, whereas all other tools require you to download the caption file, then upload it back to YouTube. That's not a huge problem, but it's inefficient. I say that CaptionTube "theoretically" supports this because I only saw this option once when I tried to "Publish" my captions. Despite a vigorous search I could never get that option to appear again. CaptionTube does have "Beta" next to its logo, so maybe this tool will improve with age.

Each of these tools has a form field in which captions are entered, and hotkeys for controlling the player and performing most transcription-related functions. Therefore, if a user can navigate to that form field and give it focus, they can caption a video. That said, navigating to the form field is no trivial task without a mouse or using a screen reader. And the subsequent steps in the workflow (e.g., editing captions, adjusting timing, exporting the results) could be daunting challenges for some users. None of these tools was developed with accessibility in mind.

To provide students access to captioned versions of YouTube videos, assuming YouTube isn't an option, one could use either dotSUB or Universal Subtitles. If it's important that the captioned video not be displayed publicly, dotSUB is the only choice. If you prefer the ease of use of another tool (Universal Subtitles or Subtitle Horse) you could use those tools to caption the video, then download the caption file and upload it to dotSUB. All tools export to SRT caption file format (Subtitle Horse also exports to W3C Timed Text), and dotSUB supports importing SRT files.