In my previous blog post I explored strategies for converting Microsoft Word docs to accessible PDF and HTML. For HTML, I found that Word produces a relatively clean HTML file if you save to “Web page, filtered” in Word 2010 or 2013 for Windows or “Save only display information into HTML” in Word 2011 for Mac.

The HTML that Word produces preserves heading structure, includes image Title and Description together as a combined alt attribute, preserves language of the document and any foreign language parts, and preserves table headers.

However, there are two problems with Word’s output:

Regarding the latter problem, I don’t want any presentational markup in my document! I plan to plug the content into a website that already has an external style sheet. I want complete separation of content and structure from presentation.

I tried several online Word to HTML converters without satisfaction. Even HTML Tidy (e.g., HTML Tidy Online) doesn’t seem to have an option to achieve my desired level of tidiness. The only solution I’ve found is to manually strip out all the unwanted markup using an HTML editor. This sounds tedious but most HTML editors include an option that allows users to search and replace content using regular expressions, which greatly streamlines the process. 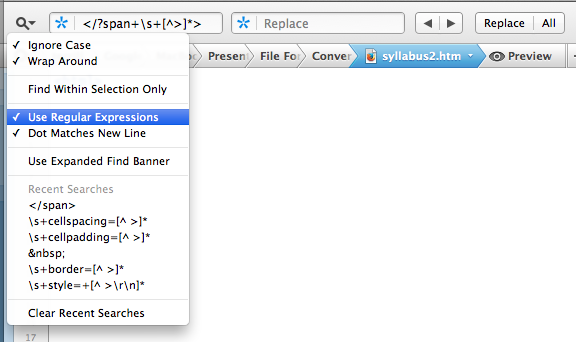 Regular expressions are strings of characters that are used in pattern matching. They’re entirely unreadable for people who don’t know the language, and I’ve always considered them to be the domain of Hard Core Geeks. I don’t profess to be an expert, but I’m fascinated by their efficiency and for nostalgic reasons I enjoy using code that originated in the early days of computing.

Following are the regular expressions I use to clean up Word’s filtered, but not quite filtered enough, HTML files. I just find all text that matches each expression, and replace it with nothing.

If a document includes data tables, a few additional searches are required:

Of course, this results in a relatively clean table, but not a fully accessible one. Now you have to add the necessary markup to make it accessible. WebAIM explains this well in their Creating Accessible Tables tutorial.

Putting it all together

One could perform one massive find and replace operation by stringing all of the above expressions together, separated by the OR operator (“|”), like so:

I suspect this is only skimming the surface of the problem as it’s based entirely on my experience with fairly simple Word documents. But it’s a start. I welcome suggestions.

The above expressions do not address the problem of Word exporting lists to HTML paragraphs. I created a List Test in Word and exported that to a List Test in HTML. In studying the latter, here’s what I think I know about Word’s list code:

Matching the above pattern and replacing it all with a <li> would seem to be fairly straightforward using regular expressions, but I’m stumped on how to figure out where a list begins and ends, which is necessary so we know where to place the opening and closing <ul> or <ol> tags.

Any Hard Core Geeks in the crowd who are up to the challenge of figuring that out?

In my previous blog post, I found that Libre Office does a better job than Word at exporting to both PDF and HTML. Its HTML output includes gobs of presentational markup just like Word’s output does, but at least it exports lists as lists (albeit without closing </li> tags).

So, one seemingly complete solution for exporting from Word to HTML would be to follow these steps:

One problem with Libre Office is that it doesn’t include header tags in its data tables, but data tables will require additional editing anyway to be made fully accessible, so that really isn’t a problem.

Now, time for BBQ and fireworks…

One reply on “Cleaning up Word’s HTML with Regular Expressions”

Seems like a good solution might be loading the HTML into Casperjs and then manipulating the DOM, followed by exporting the DOM to a file. Should be more reliable than regex, I think. Maybe an open source project?