In my recent blog post on Converting Word to PDF or HTML, I described some confusion that stems from Microsoft Word’s having two fields, Title and Description, for entering alt text for images. Unbeknownst to me at the time, Greg Kraus of NC State had recently written a similar blog post in which he echoed this confusion. 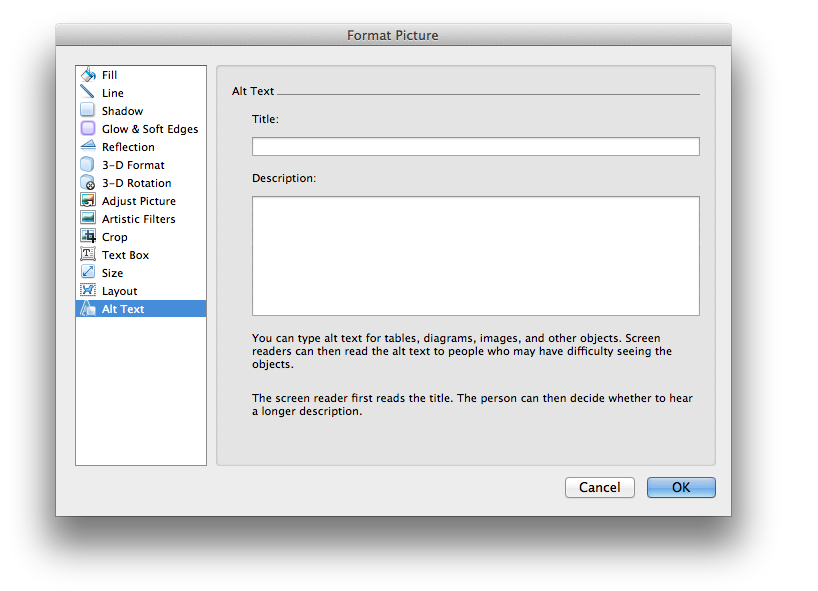 Prior to Office 2010, Word only had one alt text field, which was simple enough. That’s the field you would use to add a brief description of the image, and your description would survive as alt text when the Word doc was exported to tagged PDF or HTML.

But now there are two fields, Title and Description, in all versions of Word from 2010 onward.

Word’s Format Picture dialog includes help text that describes Microsoft’s intention: “The screen reader first reads the title. The person can then decide whether to hear a longer description.”

This isn’t a bad idea. It’s analogous to the alt and longdesc attributes that have historically been used for different purposes in HTML. All informative images need a short, sweet description in order to provide access to the image content (alt); and some images additionally need a long description where the content is too complex to be described succinctly, for example a chart, graph, or diagram (longdesc).

However, this model can only be effective if it’s well supported and properly implemented, and currently it’s not. This model has been adopted by other tools, include Google Docs, Open Office, and Libre Office, all of which now have both Title and Description fields for alt text. However, there are variations in how this data is used and whether it survives when exported or imported from one application to another.

So, which field(s) should you use? Answer: It depends…

If your original document is in Microsoft Word

If your original document is in Google Docs

If your original document is in Libre Office

If you just want to remember one thing: Use Description, not Title. This works more often than not. The only scenarios in which Title is a better alternative are: